Scott had always had fantasies about being a dress, so one day when he knew his girlfriend was going to go out for the night Scott phoned in sick to work and used a spell he found online to meld with the dress she was going to wear.
The spell worked perfectly and within moments Scott was just a red and white polka dot dress hanging in the wardrobe. He loved the feeling of hanging there, it was so strange for him to feel so light and thin. He was even more elated when she took him from the hanger, unbuttoned him and slipped into him. Even now he fondly remembered that night, with all the swishing and swaying when she danced with her friends.
But that was seven years ago and being alone in the wardrobe had become boring, months on end just being shoved back and forth along the rail as she chose other skirts and dresses. She only wore him once or twice a year now as she had bought other, nicer party dresses.
Scott didn’t want to be a dress anymore, he didn’t want to be worn by the woman he loved as she danced with other men, he didn’t want to hear her have sex with men while he was hanging in the wardrobe or crumpled on the floor. But most of all he didn’t want to be ignored by her. So on the odd occasion that she did take him out, he tried desperately to shout, scream or move. He knew it wouldn’t work, it never did, but he had to try… He couldn’t just give up, not even after all this time. 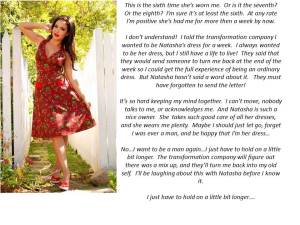